February 25, 2015 admin Comments Off on Lineage 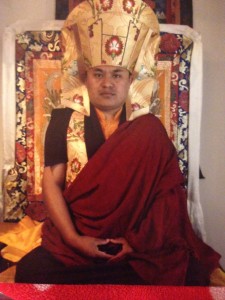 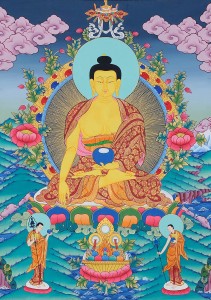 The Buddhist teachings originated in India around five hundred b.c.e. when Siddhartha Guatama went on his journey to spiritual awakening. He longed to find the answer to human suffering, to understand birth, old age, sickness and death. He had lived a life of highest privilege but longed to know life’s greater meaning and purpose. Though he practiced great austerities and advanced meditation practices that were taught at the time, he eventually realized that the true answer to the suffering of beings and the path to wisdom was found in a middle way, beyond all extremes. He sat under a tree in ancient India and resolved to full awaken. 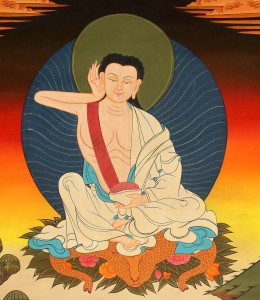 Marpa Lotsawa then passed these teachings to his disciple, Milarepa who became one of the most respected yogis of Tibetan Buddhist history. Milarepa embodied the possibility of total transformation, completely turning his life around after a dark past to then dedicate his life to the awakening of all beings. Within one life time he exhibited great wisdom and composed many spontaneous songs of realization which he became famous for.

Milarepa then passed his lineage onto his disciple, Gompopa. Gompopa studied medicine and was later married and had a child. However both his wife and child died and he became a monk. In 1109, he went to study with Milarepa from whom he received the meditation classes which became his main practice for the rest of his life. For a full biography of Gompopa visit this page. 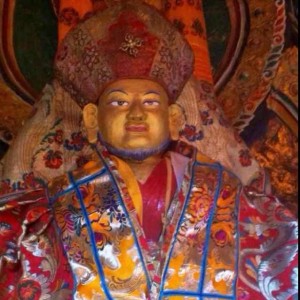 One of Gompopa’s main disciples was Pakmodrupa Dorje Gyalpo (phag mo gru pa rdo rje rgyal po, 1110-1170). Pakmodrupa’s parents had died when he was young. He went to live and work with his uncle who was a monk, until he left for pilgrimage to Tibet when he was twenty years old. He was fully ordained when he was twenty five and studied with tantric masters of all the lineages existing in Tibetan Buddhism at the time. He studied with one of the most renowned early tantric masters of the Sakya school, Sachen Kunga Nyingpo (sa chen kun dga’ snying po, 1092-1158). Then he went on to study with Gompopa and Pakmodrupa’s dialogues with his master about Mahamudra meditation were recorded into treasured texts of the Kagyu lineage. During his life, Pakmodrupa demonstrated miraculous capabilities performed by great Tibetan Buddhist masters, such as leaving his foot print in rocks. For a full biography of Pakmodrupa’s life click here. 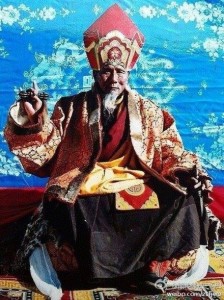 Tibetan Buddhism has a long tradition of passing the lineage of important teachers through recognizing their re-incarnations. These Lamas are then trained and groomed to continue the lineage of their predecessor and given extensive education in Buddhist philosophy and practice.

When Gyaldak Rinpoche was 10 years old, he was recognized as the emanation of Pakmodrupa Dorje Gyalpo.

This recognition was based on a prophecy by the great Tibetan yogi  Yingrey Cheme Gonpo Dorje, who was a Kagyu and Nyingmapa practitioner.  He was also recognized as this tulku by the great Nyingma Yogi Sera Yangtrul Rinpoche, by Sakya Yogic Dawa Sangpo and a great Tibetan yogini name Choesum Khandro. When he was in India, he was also recognized by His Holiness Taklung Matul Rinpohe’s head of Taklung kagyu lineage. 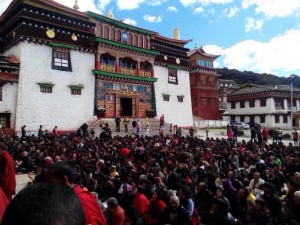 Gyaldak Rinpoche left Tibet in 1991. He stayed at Kagyue Palchen Choeling Monastery  in Sikkim in eastern India and studied meditation practice and techniques for settling the mind.

After Gyaldak Rinpoche left Tibet, he also stayed at Palpung Sherabling Monastery in northern India and studied meditation and Kagyu  Buddhist philosophy under His Eminence Mingyur Rinpoche. He received Dzogchen teachings and meditation guidance from His Holiness Chatral Rinpoche in Nepal. He received teachings and empowerment from His Holiness Gyalwa Karmapa  and from other great master Yogis from Tibet. Then he came to settle in the United States in 2005. 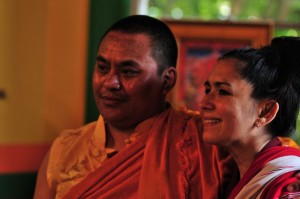 Gyaldak Rinpoche’s father was a Nyingma and Kagyu practitioner. He had studied with a treasure revealer named Rigdzin Chochung Namgyal. He and a Tibetan yogini named Pema Khandro travelled all around Kham together teaching Dzogchen teachings, Chod and the Six Yogas of Naropa. He found ancient Buddhist teachings that had been concealed after pulling a phurba out of a rock. A phurba is a Buddhist ritual object and he was able to pull it from the rock due to being a greatly accomplished Buddhist yogi. He descovered other ancient teachings that had been concealed when finding a Buddha statue and another time when finding a text that had been hidden. He and Pema Khandro disappeared in 1959 and the manner of their death was unknown. After Gyaldak Rinpoche came to the U.S. he recognized Pema Khandro’s reincarnation and presided over her enthronement in Berkeley, California.

Gyaldak Rinpoche brings the great wisdom of Tibetan Buddhism to the West. Growing up in eastern Tibet, Gyaldak Rinpoche became the head of his monastery when he was recognized as an emanation of Phakmodrupa Dorje Gyalpo, one of the founding fathers of the Kagyu lineage. Among his western students he is known for his kindness and humor.